A World Wide Firestorm of Hypocrisy Has Erupted!

A World Wide Firestorm of Hypocrisy
Has Erupted!

It went on for quite an extended time after the execution date of Troy Davis had been set in Georgia and the appeals which eventually went all the way to the U. S. Supreme Court were exhausted.

The media people helped immensely in this drama as they exploited it to the hilt and then some. But that is understandable since a number of these people are rabid anti-capital punishment when it comes to the death penalty issue.

The protests were organized and after the execution a plethora of comments were made not only within the United States but from foreign nations as well since this happening captured world-wide attention.

Where is the hypocrisy you ask? Very simple -- on the day Davis was executed an incalculable number of innocent unborn children were brutally mutilated and murdered in their mothers' (term used very loosely) wombs!

Now then, show me the outrage and numerous protests related to these heinous crimes of the first magnitude. The voices of citizens, their leaders in government and church are totally silent. And those who were screaming in protest over the execution of one man don't seem to be at all bothered about the mass slaughter of the innocents which goes on every day throughout the world in many nations, the United States included!

Davis vehemently claimed to be innocent to the very end. If he was, this is a grave miscarriage of justice and a tragedy of major proportions. But is it any more so than the grisly "execution" of even one innocent unborn child? And in this case the "executioner" (mistakenly identified as an M.D.) is paid big bucks for the killing of that unborn child. It is even more shocking when a person is honest enough to consider the fact that the mighty Creator of the heavens and the earth -- the One Who gives life and breath to all -- has explicitly revealed that He has a special plan and purpose for every conceived human being!

We in the U. S. as well as those in other nations are subscribing to the deadly doctrine of the Nazis of WW II era, though we would never admit to such. The Nazis came to the point where they believed they had the "authority" and the "knowledge" to determine who was qualified to live and who was not. And so they set up a system by which those who fell into the category of "not qualified to live" were quickly and efficiently dispatched from their earthly existence.

The main differences between us (U.S. and other nations participating in the shedding of innocent blood) and the Nazis are the ages of the victims and the tools and methods used in these most despicable acts! However, this flawed reasoning, whether it be the Nazi style or our more modern approach, as to why some are not qualified to live has the same outcome every time -- sure and certain judgment at the hands of a holy God!

So the next time someone is slated to be executed here in the United States and the protests begin, stop and think for a moment about the huge number of innocents who have never committed a crime of any kind being mercilessly mutilated and murdered in the womb even as the thoughts run through your mind. And if you dare, think another thought in the form of a question -- what is going to be Almighty God's response to this? 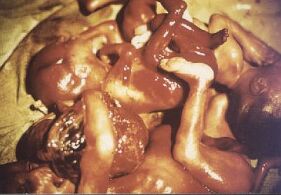 O LORD, how long shall I cry, and You will not hear? even cry out to You, "Violence!" And You will not save. Why do You show me iniquity, and cause me to see trouble? For plundering and violence are before me; there is strife, and contention arises. Therefore the law is powerless, and justice never goes forth. For the wicked surround the righteous; therefore perverse judgment proceeds.


Return to OR Sneak a Peek at C. D. Harriger's BLOG at
Musings of a Maverick!

Circuit Rider's Range (Main Area)
Ramblings from the Pen of a Maverick...
CR's Leap of Faith! OR The Whole Spread of CR's Range!
Return to Building Walls with Untempered OR Tempered Mortar!
Bird's Eye View of CR's Range
What's New At CR's Range?


How to Become A Christian

For comments, complaints, or just plain axe-grinding, contact C. D. Harriger by clicking on Penelope, efficient mail hostess of Circuit Rider's Range, and she will set up the email form for you to fill out and send on its way

The poster above is